As a beginning one has to ask “What value is there from writing a history of Zion Church?” later becoming known as Waterside Baptist church. In seeking an answer it is good to remember that scripture encourages us to “Remember the days of old, and consider the years of many” (Deuteronomy 32:7). Secondly, it is good to recognise, through the story of Zion, the glorious grace and abundant mercy of our Lord Jesus Christ which has revived the souls and touched the hearts of numerous men and women, boys and girls through the last two centuries. Thirdly, we see how the bountiful providence of God has supplied all that was needed, even in difficult times, to sustain the folk and prosper the works of their hands.

We may not be able to measure the influence Zion’s witness has been to the hearts and minds of Kings Langley people; that will not be known this side of Heaven, but the legacy of faithful service over many years is a shining example to us all. Zion’s current congregation can truly say “Therefore we also, since we are surrounded by so great a cloud of witnesses, let us lay aside every weight, and the sin which so easily ensnares us, and let us run with endurance the race that is set before us, looking unto Jesus, the author and finisher of our faith” (Hebrews 12:1)

So let us look at the story of Zion by piecing together the details of how it started and looking at some of the people who served and worshipped in the Church. From our records we see how the people organised and administered the Church and adapted the Chapel to meet the needs of their day.

From the beginning
Zion’s early history is somewhat difficult to get hold of because the available evidence is quite fragmented. However, Ralph Chambers, in his manuscript on the “Strict Baptist Chapels of London” informs us that a group of Dissenting Christian friends were meeting in Kings Langley for Divine worship in the late 1700s. It is very unlikely this “group of friends” was known by any other name, but there is little doubt they were the forerunners and “founding fathers” of the Zion Church we recognise today. D.R. Watts’ booklet on the “History of the Hertfordshire Baptists” explains that men were commissioned from the Hertfordshire Union to provide preachers for the group. He suggests that the Union was active in “the establishment of a series of chapels at Kings Langley, Chipperfield, Flaunden and Bedmond in 1800. This work received significant support from an “evangelical labourer” by the name of Nathan Sharman. William Upton’s “The Religious Condition of the County of Hertfordshire” tells us that a formal arrangement with the Union for the supply of preachers to the friends at Kings Langley seems to have been put in place at an inaugural meeting on 11th April 1810.

Watts also tells us that the group seem to have become formally recognised as an “Independent Church” sometime before 1820.

Chambers confirms some of the earlier history as he records the rather nomadic existence of the group as they quite slowly formed into a recognised Church. He says the meetings were firstly held in a place of unknown location before they moved into a barn in Langley Hill possibly round about 1810 and this tenure may have lasted until about 1818. These dates are uncertain but we do know from Union records they were attending at Langley Hill in 1812 and in 1815. The next move was to an “outbuilding” in the village belonging to a Mr Nash who it is believed was a member of the fledgling Church. Chambers goes on to say “The next place of meeting was a barn at Waterside, which has since been converted into a dwelling house. This place proved to be very unsavoury, as it was close to, or adjoined to, a boatman’s stable, from which came not only unpleasant smells but coarse and blasphemous language, and considerable noise disturbed the services”. It is unlikely that the Church had sole use of any of these premises. Judging from examples of other Churches in the county the barns they used could well have been working buildings with all the normal farming and storage paraphernalia in them. They afforded little in the way of comforts to the people as they worshipped and today we can only marvel at the hardship they were prepared to endure to have the freedom of worship in the way they believed.

Despite the fact that the Church had no permanent place of meeting, Morris Read, in his 1936 account of Zion’s history, tells us that numbers continued to increase and these people had a heart-hunger for the Word, and, becoming dissatisfied with the preachers supplied by the Hertfordshire Union, they separated from that body, deciding to trust in the Lord to send them ministers whose views of the truth were more in accordance with their Articles of Faith. This separation took place sometime about the mid-1820s, as the Church then stopped having Union speakers. In the providence of God, preachers were prepared to “supply the pulpit” and we know of Mr Thomas Lauder, Mr Macklin, Mr Danes, Mr Hicks and Mr Timmings, among others, all came from London and it is recorded their ministry was attended by much blessing and it is to God’s glory that numbers continued to grow.

At the time of separation from the Hertfordshire Union this group of worshippers had become an established Church with a declared basis of belief, but sadly there is no surviving copy of the Articles of Faith mentioned in Read’s account, but we do have a précis of the doctrinal position they held in the early 1830s, (taken from the Deed of Covenant for the land transfer).

Their profession was –
We believe:
1. There is one Supreme being in three persons co-equal and co-eternal.
2. The total depravity of human nature by the fall of Adam.
3. The absolute and unconditional election of the whole Church in Jesus Christ unto eternal life.
4. That Jesus Christ is God by nature of the same substance with the Father and equal in power and glory.
5. That the Lord Jesus made a perfect, satisfactory and meritorious atonement for His people by which alone sinners can be saved.
6. That sinners believing in the Lord Jesus Christ are justified by the imputation of His righteousness received by faith without works.
7. That the influence of the Holy Spirit is absolutely necessary to renew and sanctify the soul and prepare it for the enjoyment of Heaven.
8. That those who the Father has chosen whom the Son hath redeemed and whom the Spirit sanctifies shall assuredly obtain eternal life.
9. That the ordinance of Baptism is to be administered to persons who believe and their infants by pouring or sprinkling water upon them in the name of the Father, Son and Holy Ghost.
10. That the ordinance of the Lord’s Supper is to be received by those only who from a principle of grace in their hearts bring forth the fruits of righteousness in their lives.

These ten declarations were in every way compatible with those of the 1646 Westminster Confession of Faith used by many dissenting churches embracing the Calvinistic doctrines of grace. However it is important to note that articles 9 and 10 are quite contrary to the corresponding articles of the 1869 Baptist Confession of Faith that Strict and Particular Baptists embrace. At a later date these differences were at the centre of tensions that had to be overcome in the years following.

Preachers continued to be supplied from a number of London Churches, despite the considerable difficulties of travel in those early days. The Church was also blessed with some preacher from nearby Strict and Particular Baptist Churches.

Up to this date we do not know if the Church had appointed any deacons or officers to be leaders of the Church. Judging from examples of other local churches it does seem more than probable that the Church did have some form of diaconate to administer the Church. Again we are without records, but we do know from draft documents dated 1833 and 1834 that before the very generous offer of Mr Gulston was legally accepted the Church had appointed trustees and these became the custodians of the land given by Mr Gulston.

The Church minute book tells us that “they (the Church fellowship) offered up many prayers at the throne of grace that a piece of land might be given them to build a chapel … as they were too poor to purchase.” They record that “When man fails the Lord appears and makes crooked things straight and rough places plain”. Indeed that is what did happen. Mr Richard Gulston (senior) a yeoman farmer of Waterside had an afflicted daughter who desired that a minister from the Church visit her. One of the supply preachers did just that and his visits were considered to be of much help to her. As an expression of his appreciation for this kindness and help given to his daughter Mr Gulston made a gift of a plot of land to the Church. This was part of an orchard along Waterside towards the Toovey’s Mill end.

The gift of the land was not without some modest conditions. Firstly each of the six trustees was required to pay Mr Gulston senior five 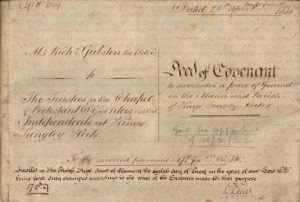 the work. Mr Read’s account tells us that the people were thoroughly heartened and set to work with a will, for four months later, on 29th July 1835, the Stone-laying Service of the new chapel was held. shillings “of lawful British money” and secondly the trustees were “to provide the said Richard Gulston the elder, his heirs and assigns … one good and commodious pew near the pulpit … for use by him and his family for ever exclusively”.

The Land Deed states that a parcel of land measuring 35 feet on the road and 45 feet deep was transferred by deed of gift from Mr Gulston to the Trustees of the Chapel of Protestant Dissenters called Independent at Kings Langley Herts in April 1835. Immediately the Church set about raising funds by subscription and appointed Mr Tyers as architect to draw up plans and to estimate the cost of the work. Mr Read’s account tells us that the people were thoroughly heartened and set to work with a will, for four months later, on 29th July 1835, the Stone-laying Service of the new chapel was held. The Rev Richard Luckin of Woodbridge Chapel, Clerkenwell, laid the foundation stone, in which was placed a bottle containing the Articles of Faith of the Church. Large

numbers gathered, overflowing into the adjoining orchard, for the services. This account leaves us with a problem! No matter where you look at Zion Chapel this foundation stone cannot be found!

Building, and the equipping of the Chapel, continued through to the Spring of 1836 until all was complete and the opening service was able to be held on Sunday April 5th 1836 when once again Rev Richard Luckin officiating at the morning service and Rev Joseph Irons of Grove Chapel, Camberwell, conducted the afternoon service, which included The Lord’s Supper and “ordering the Church” with Thomas Hamshaw as pastor and Messrs James Young and Henry Worster as deacons. Pastor Irons also led the worship at the evening service. The Church Roll tells us that at the opening of the Chapel, Zion had a worshipping congregation of 23 members. With no previous records we cannot tell whether the pastor and deacons were in office before the opening. The Church minutes make no mention of the Pastor being inducted into the Church which seems to suggest he may have been in office prior to 1836.